BAND BIO
3 Saints And A Sinner (or as the band likes to be called 3S1S) is a Classic Rock band based in the San Gabriel Valley. Playing together for 6 years, they each bring their own styles drawn from experiences locally & abroad. Classic Rock in their case consists of primarily 70s Rock & Roll, but the band delves into music from the 50s, 60s, 80s & beyond to expand their repertoire. The setlist is growing and the band has a Facebook page to stay in touch with their fans and take an occasional request or two.

The band is driven by the traditional 2 guitar format courtesy of Tommy Radu and Rich Moran. Both handle lead and background vocals. The rhythm section consists of brothers Tracy Dragoo on bass and Bill Dragoo on drums and percussion. All four hail from California and their love of music shows when they perform. Their proficiencies shine through but they know that having fun in the midst of performing and playing to audiences is a major factor in staying together for 6+ years!

3S1S is looking forward to an exciting 2013 and hopefully playing at a venue near you in the future! 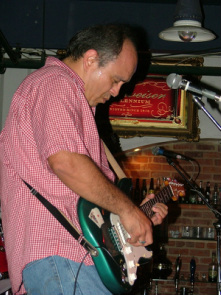 Rich Moran has been playing since the ripe old age of 15 & has been gigging steadily since 1976. He turned 17 that year & even though he was one year shy of playing legally in bars, he played them anyway.

Rich played the Hollywood club circuit from 1979 to 1985. His first shot at songwriting came with a band named Ground Zero. But subsequent bands The Unexpected & The Turnstyles got his songs heard on local radio stations KLOS, KLXU & various college radio stations in SoCal. As the 80s came to a close, Rich could be found doing session work for commercial demos as well as being a hired gun in various original bands.

While playing originals throughout the 80s, Rich came full circle in the 90s & joined a cover band – True Story. Rich left the band in 1997 & jumped at the chance to join an original “Rock-en-Espanol” band. This exposed Rich to a new scene & honed his performance skills in front of a different audience.

The new millennium found Rich abandoning the idea of playing in bands & focused on playing worship music for Vineyard Christian Fellowship of Monrovia. He soon however became restless & joined a blues-rock trio Blues Triangle. Along with Blues Triangle, he is currently playing with 3 Saints & A Sinner; performing classic rock from just about every era. Rich played some of these when he was 15. Full circle again, perhaps? 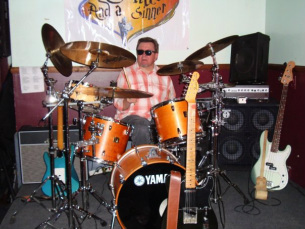 Bill Dragoo has been playing drums for over 40 years, started officially at age 13 and it's all because that Beatle drummer, Ringo! He knew he had a music bug and signed up for clarinet because he could start that in fourth grade but really was waiting for sixth grade so he could be a drummer. Right away he found himself involved in neighborhood bands like The Del-Reys, We Three, FCR, and Liberty Fields all starting by local boys in the town of Monrovia, California.  Mid-way through high school he kept involved in drums by being in the band, orchestra, and the schools' folk rock band.

He then found a new close group of friends which formed the Christian rock band, One Truth, which became the O.T. Band and then turned into Ipso Facto in the early 80's. After that group disbanded after a 10 year run of touring, three LP's and one EP, Bill continued touring or recording with a variety of artists' and groups like Tim Sheppard,  Westwind Productions, Joel Weldon Band, Stronghold, Vineyard Music Group. Bill continues to be a "Have drums will travel" to various Vineyard Christian Fellowships in southern California and Latin American countries like Venezuela, Guatemala, Costa Rica, Mexico and also toured Australia.  Bill now stays committed to Three Saints and A Sinner as an enjoyable musical venture to play all those classic rock tunes that he grew up with.
Thanks Ringo! 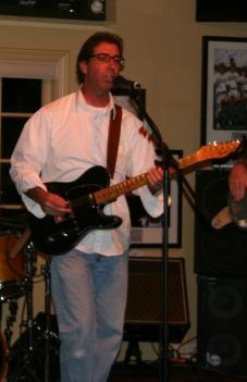 Starting out as a drummer in the early-mid ‘70’s , Tommy landed his first gig as a guitarist in 1977 , at the age of 18 in the “ Jimmy Tate Band” , covering bands such as Ten Years After and Z.Z. Top. By the following year, he formed, with three other local musicians Perfect Stranger , and started by covering the likes of Aerosmith, UFO, Sammy Hagar, Ted Nugent, and others. Eventually the band began writing their own songs , much of which, initially, were cut from those hard-rock roots. As the 80’s rolled around, and the “ New Wave” of music hit the scene, the band responded, being influenced by The Police, The Ramones, and others. That group disbanded in 1982, and Tommy once again found himself playing covers, this time with a somewhat Top 40 band called Ducky Big, again playing venues in and around Pasadena and the San Gabriel Valley and covering everything from the Go-Go’s and Missing Persons to CCR, John Mellencamp and the Beatles. Spent the better part of the next decade and a half raising kids and so forth. Dabbled in a few various and short-lived musical endeavors, and by around 2006 began the genesis of  3 Saints and and a Sinner. Now going on 6 + years, this band really is, quite literally the fulfillment of a lifetime of playing.